One of the things that used to annoy me a lot and drive me crazy with CPAP therapy was nasal congestion. You put your mask on, lie down and soon after you turn the sleep machine on, my nose would get congested. How do you stop CPAP nasal congestion and nose bleeding?
You try nasal sprays and saline rinses; adjust the humidifier and heat and use pills and whatever else one can try to stop nasal congestion. Whilst these things worked initially on going to bed, the effect would wear off and I ended up in the morning with a lot of nose snot mixed with blood.

I note from the various sleep apnea forums that everyone is different in trying to stop nasal congestion. Some people have found by turning up the humidity by going into manual control and using a lot of humidity solved the problem. Whilst for other people including me, found that minimising humidity and eventually to not using the humidifier reduced substantially or stopped the nasal congestion.

The downside of not using the humidifier was that whilst nasal congestion was minimised or even eliminated, I ended up with nose bleeding. The first morning it happened, I thought it was water. When I took the mask off, a lot of blood poured out of my nose. At the time, I remember thinking “This isn’t good. I’m in trouble!” I wondered how I was going to get myself out of this “bad” situation.


The other side effect of not using the humidifier was having a dry sore throat every morning. In a later blog post, Why Not to use a CPAP Humidifier?  I will provide details of how to overcome this issue and not use a humidifier at any time during the year with using pressure of 17 cmH2O or more.

I will share a secret with you and show a little trick that has stopped both the nasal congestion and nose bleeding when using the sleep apnea machine. The humidifier is not being used as well as no nasal sprays and saline rinses. This secret is saving me a few hundred $’s each year and will save many thousands of $’s over my lifetime.

The secret is to cover a portion of both nostrils at the middle section of each nostril with medical paper tape. Note I am using a nasal mask. I use Nexcare Micropore First Aid Tape as it is gentle to the skin, highly breathable and holds well on damp skin.

The paper tape works brilliantly every night! It stops the nose from becoming irritated and now I have no nasal congestion or nose bleeding. I wake up in the morning with a clear nose breathing freely. It’s a great feeling!

Below are pictures using the paper tape, before and after. 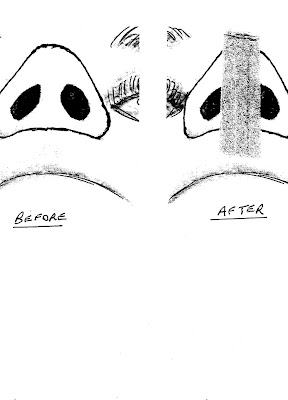 By using medical paper tape, I have a clear nose every morning as well as saving myself a lot of money by not using nasal sprays and other things. A roll of tape will last up to 2 months. The cost works out at less than $1 per month!

On cold winter days when the wind is humid and blowing strongly and I go for a walk, I put the tape on to eliminate nasal congestion. It is a tan colour (also comes in white) and it is not too noticeable when walking in winter.

Whilst trying to sort this issue out, I also came across research which advised that only 1 nostril at a time gets stuffy and congested. By turning over onto your other side in bed, the congestion will go. In the rare instances in winter when the air is very cool and humid and using the sleep machine and paper tape, my nose may get a little congested, I change sides and the congested nostril clears itself!

For those that are wondering about the effect on volume of air; there is an estimated small reduction in air of about 3% to 4%.

Those people that have air coming up through their eye tear ducts and out the eyes; this reduction in air will assist in overcoming that particular issue. For further details, refer to Secrets to Success: Answer is FREE  and Air through Eye Tear Duct.


Since originally writing this blog post, in early 2021 I began using a very high starting IPAP of 18.2 cmH2O and EPAP of 12.8 cmH2O (inhale and exhale pressure) which may cause air coming out the eyes. Top pressure during the night may be more than 20 cmH2O! This was essential to stop hypoxia (oxygen desaturation) and sleep disordered breathing causing the symptoms of Dementia.

Use BiPAP to prevent Alzheimer's Dementia caused by REM sleep issues
Let me know whether the medical paper tape works for you and stops nasal congestion and nose bleeding.

“Have courage. Be adventurous and Go for it! Overcome your fear.”
- Mrhelpful
Posted by Mrhelpful