The explanation of how I treated and stopped Sleep Disordered Breathing causing hypoxia, REM sleep and Obstructive sleep apnea issues is going to be done on a practical level based on my own personal experience. I am not a medical doctor and there will be others with more knowledge and a medical background who can explain better from a technical point of view.

When your body doesn't have enough oxygen, you could get hypoxemia or hypoxia. These are dangerous conditions. Without oxygen, your brain, liver and other organs can be damaged just minutes after symptoms start.

On a previous blog post Use BiPAP and CPAP to treat REM Sleep and OSA issues which may cause Parkinson's and Dementia, I mentioned that over the last few months, I have been grappling with the issues of awake bruxism, obstructive sleep apnea and insomnia occurring during REM (Rapid Eye Movement) sleep causing symptoms of Dementia. Awake Bruxism involves tooth clenching or tapping while you are awake which may drive you crazy and frustrated.

Unfortunately, there is currently no cure for the neurodegenerative disorders including Alzheimer’s disease, Dementia and Parkinson’s disease. These disorders alone currently affect many millions of people around the world despite billions of dollars being spent on medical research.

Biogen lost $18 Billion in one day, but beyond that, what about the precious time that was wasted? And lives lost? To put it in perspective, there have been 146 drug failures in the last few years.

As detailed on the blog pages Why is CPAP Compliance Rate Low? and Secrets to Success: Answer is FREE, there is ample evidence showing that there are up to an estimated 80% or more than 15 million people who are non-compliant, failing and non-successful on sleep apnea therapy.

This is the reason for the quote at the top of the post by Oprah Winfrey.

It will be up to you to educate yourself on how the various BiPAP, Bilevel and CPAP machines truly work to overcome any Sleep Disordered Breathing and hypoxia which may cause Alzheimer’s disease, Dementia, Parkinson’s disease and Awake Bruxism!

From personal experience having had the symptoms of Dementia and currently cleared of those symptoms; I believe that the four issues together being REM sleep issues, obstructive sleep apnea, insomnia and Awake Bruxism may be very early warning signs or markers of various neurodegenerative disorders.

It is my belief that it is possible that by treating these four issues together, a person may be able to stop or at least prolong the onset of REM Sleep Behaviour Disorder (RBD). By doing so, may prevent up to some decades later, RBD leading to a diagnosis of Alzheimer’s disease, Dementia, Parkinson’s disease and other disorders.

On previous blog posts, I raised five questions in relation to the treatment of these four issues. On last month’s blog post Stop CPAP REM issues and Sleep Apnea causing Dementia: Use BiPAP; there were three remaining unanswered questions.

Is it just REM sleep issues, obstructive sleep apnea and insomnia causing sleep disruptions during the night or is there something else involved?

Does obstructive sleep apnea occurring in all REM sleep periods cause Awake Bruxism or just one or two periods of REM sleep?

The answer to the last question and some of the first two questions were answered on the previous blog post.

In summary, Awake Bruxism was due to issues arising during the REM sleep period between 4 and 5 hours of sleep. This period makes up a large proportion of total REM sleep for a night.

In addition, I believe that it is essential for a person to preserve as much of the REM period between 4 and 5 hours of sleep for as long as possible. This is best illustrated by the graphical representation below comparing the sleep pattern of a Young Person to that of an Elderly Person. Note the lack of REM sleep and the periods of wakefulness during the period between 4 and 6 hours of sleep for an Elderly Person. 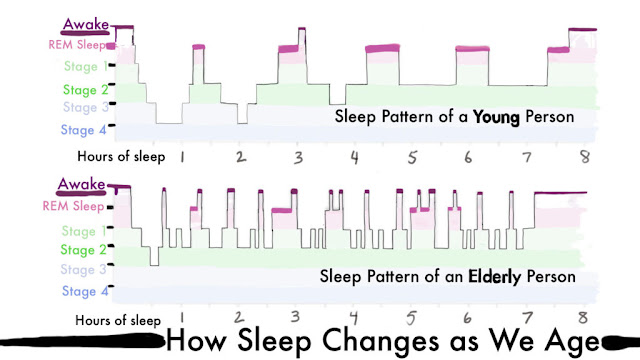 This is a graphical representation of the amount of time a person
spends in wakefulness and in the different stages of sleep throughout the night. It is easy to see how the young and the old sleep differently during the night by looking at their hypnograms. The elderly have more periods of wakefulness and less time spent in the slow wave sleep of stages 3 and 4.

It is clear from various research articles that REM sleep is critical and essential for everyone to have in sufficient quantity and quality. Unfortunately, during REM sleep a person’s breathing may become irregular, erratic and shallow.

The challenge with obstructive sleep apnea, insomnia and Awake Bruxism occurring with REM sleep issues is how to overcome these issues using sleep apnea therapy with CPAP, BiPAP and Bilevel machines.

To overcome this challenge, a question needs to be answered first is:

If Awake Bruxism is due to REM sleep issues; is there a specific event that occurs during the REM sleep period between 4 and 5 hours of sleep in addition to obstructive sleep apnea and insomnia which may explain the cause of Awake Bruxism?

The answer is: YES!

By stopping hypoxia due to Sleep Disordered Breathing (SDB), I was able to stop hypoxia causing obstructive sleep apnea and insomnia occurring during REM sleep period between 4 and 5 hours of sleep. As a consequence, I was able to stop Awake Bruxism and eliminate the symptoms of Dementia!

Understanding the risk factors for dementia is critical. We must pay closer attention to those with SDB, as they may be at higher risk for dementia. This is an important finding because SDB is common and treatable. The exact association between SDB and cognitive decline is not clear but is thought to be related to periods of reduced oxygenation to the brain.

From personal experience, there may be other reasons for Sleep Disordered Breathing.

Obstructive and Central sleep apnea are only classified as an apnea when the apnea is 10 seconds or more. Sleep Disordered Breathing may be due to “little” apneas of less than 10 seconds, flow limitations and respiratory/ breathing issues. These issues may not be included in the AHI (apnea-hypopnea index); however, they can cause disruption to your breathing and sleep especially where there is a cluster of them occurring during REM sleep.

Flow Limitation is when the airway experiences resistance and there may be only a small reduction in breathing of say 10%. This can still trigger sleep fragmentation and oxygen fluctuations.

Some nights in order to see what caused the Sleep Disordered Breathing; I needed to screen a 3-5 minute report of Flow Rate and Mask Pressure as there was nothing showing for apneas and flow limitations. In addition, I may review a report using “User Flags” and events of at least 5 seconds as you can have a cluster or a number of apneas including “little” apneas occurring in a short period of time. These reports can be obtained by using the free SleepyHead and Oscar software. (Links are on right hand side).

How does Dementia and Alzheimer’s disease arise?

Below is an example of a diagram detailing the current thinking by medical specialists. 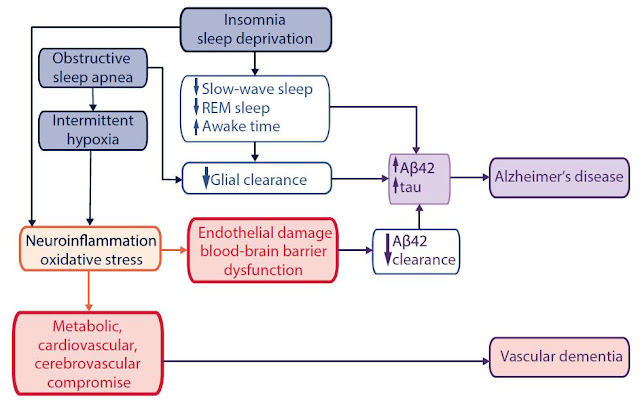 Sleep disorders are emerging as a biomarker for prodromal dementia.

A new study indicates that the brain goes through a “cleansing” process while you sleep.

Experts say this cleansing washes away proteins that accumulate during the day and can help lower the risk of dementia.

The exact process taking place involves our glymphatic system, a waste clearance system for our central nervous system. While we’re awake, precursor proteins called amyloid-betas spike and accumulate in our brain. During our sleeping hours, our brain flushes these amyloid-betas, preventing them from forming into plaque and damaging our neurons.

Without adequate sleep, our brain can’t effectively wash away these precursor proteins. Their accumulation has been associated with a higher risk of dementia due to the damaged neurons.

How can Sleep Disordered Breathing and hypoxia or oxygen desaturation cause obstructive sleep apnea, insomnia and Awake Bruxism?

When these issues arise during REM sleep, how may they lead to the onset of REM Sleep Behaviour Disorder (RBD) and some decades later to a diagnosis of Alzheimer’s disease, Dementia, Parkinson’s disease and other disorders?

I suggest to a number of medical specialists that serious consideration should be given to amending their thinking and the diagram above on how neurodegenerative disorders may arise.

On the next blog post, I will use my sleep data reports obtained from SleepyHead/ Oscar software to explain how this situation may occur.