Use BiPAP and Bilevel auto adjusting pressure machines to prevent Alzheimer’s Dementia and Parkinson’s disease. These neurological disorders may be caused by a combination of REM sleep issues, hypoxia, Sleep Disordered Breathing (SDB) including obstructive sleep apnea and insomnia.

The explanation of how I treated and stopped the symptoms of Dementia is going to be done on a practical level based on my own personal experience. I am not a medical doctor and there will be others with more knowledge and a medical background who can explain better from a technical point of view.

As detailed on the previous blog post Stop Insomnia, Hypoxia, REM sleep issues causing Alzheimer's, my dementia symptoms were due to hypoxia or oxygen desaturation occurring BEFORE obstructive sleep apnea during the REM sleep period between 4 and 5 hours of sleep. By stopping hypoxia due to Sleep Disordered Breathing, I was able to stop a sequence of events from occurring. These events were obstructive sleep apnea, REM sleep issues, insomnia, Awake Bruxism and symptoms of Dementia.

It is my belief that it is possible by treating these issues together as early as possible, a person may be able to stop or at least prolong the onset of REM Sleep Behaviour Disorder (RBD). By doing so, may prevent up to some decades later, RBD leading to a diagnosis of Dementia, Alzheimer’s and Parkinson’s disease and other disorders. Further details are on the previous five blog posts (listed at the end of this post).

The questions that need answering are:

How do you stop hypoxia and sleep disordered breathing?

How do you bring order and control to your sleep disordered breathing during REM sleep when your breathing may become erratic, irregular and shallow?

From personal experience, to achieve success is going to depend on two factors:

1. Type of sleep machine you are using.

It is my belief that CPAP machines will be limited in overcoming the above issues. You will likely need a BiPAP or Bilevel auto adjusting pressure machine. The bilevel machine that I use when compared to CPAP has additional settings for Trigger and Cycle breathing sensitivity, TI Min and TI Max (time spent on inhalation) and pressure support of greater than 3 cmH2O.

In addition, based on my experience using a Bilevel ST machine with iVAPS, an Adaptive Servo-Ventilation (ASV) machine may also achieve success with the variable pressure support settings being available. This machine will allow a person to have a lower starting IPAP and EPAP (inhale and exhale pressure) with higher pressure only “kicking in” when required to get you to breathe properly again. An ASV machine will be a less expensive alternative to using a BiPAP machine with AVAPS or Bilevel machine with iVAPS.

When Should BiPAP Be Used?

BiPAP machines are commonly used by patients who cannot tolerate CPAP machines. Some patients report difficulty when exhaling with a CPAP machine, as machines set to a high-pressure level can make patients feel as if they’re working harder than they should to exhale and breathe out. This effect compromises sleep apnea treatment, since patients may not benefit from quality sleep due to difficulties with exhaling against the CPAP.

2. Time and effort you are prepared to put in to achieve success.

It has taken me more than 6 weeks of using “trial and error” on using different machine settings. I constantly changed the settings, sometimes every night. This was due to adjusting to the increasingly higher machine pressure and having side effects and issues. Such issues included aerophagia, waking up during the night, mask leaks and air coming through the eye tear duct and out the eyes.

In addition, I had to spend time reviewing daily sleep reports and how I was actually feeling on waking up each morning to understand what machine settings were required for the next night. It was a hard few weeks to achieve success as I did not sleep well on some nights. On a few days I would wake up tired and fatigued.

Achieving success will make all the time and effort that you put in now, totally worthwhile. I am waking up feeling great and energized each day and you will have this wonderful benefit for the rest of your life!

More importantly, you may prevent up to some decades later a diagnosis of REM Sleep Behaviour Disorder (RBD) and Alzheimer’s, Dementia and Parkinson’s disease. Also, overcoming RBD and obstructive sleep apnea may significantly reduce the risk of having many other serious medical conditions including heart attack and strokes, kidney disease and Type 2 Diabetes.

To answer the two questions above as to how to stop hypoxia and bring order and control to sleep disordered breathing, I show the sleep reports BEFORE and AFTER adjustments to the machine settings. The BEFORE reports were shown on the previous month’s blog post.

BEFORE ADJUSTMENTS to machine settings – 6 September 2020 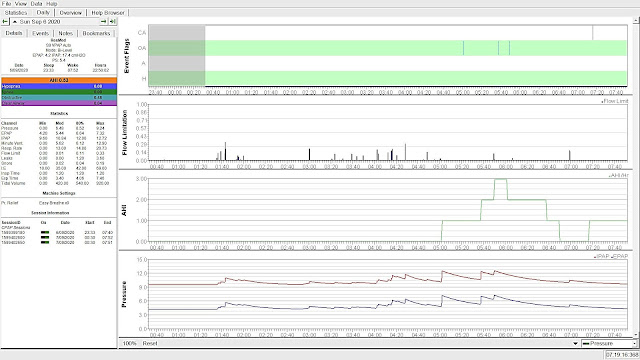 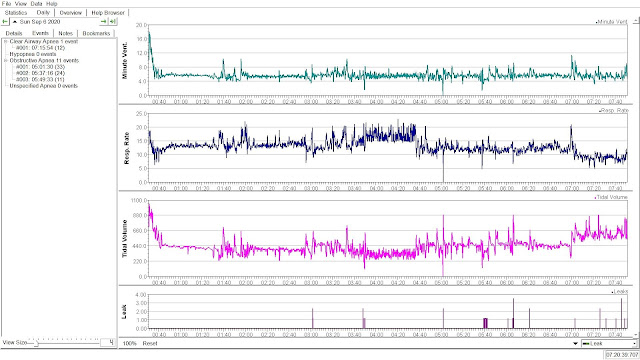 AFTER ADJUSTMENTS to machine settings – 22 March 2021 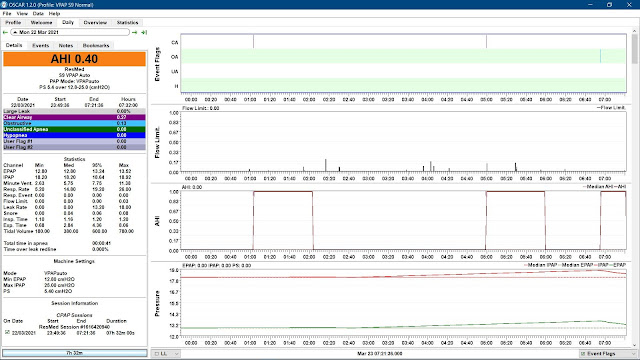 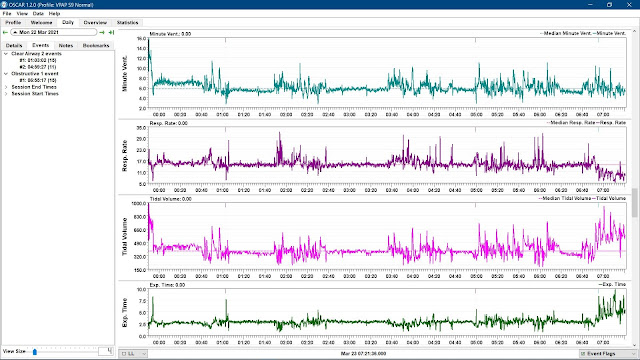 1. Slept through the night more than 7 hours waking up at 6.55am. Note the change in respiratory rate and tidal volume of air after this time. Before adjustments, I was waking up every night during what I believe is the critical REM sleep period of 4 to 5 hours of sleep.

3. The high starting pressure has stopped hypoxia and significantly reduced sleep disordered breathing including AHI (apnea-hypopnea index) and obstructive sleep apnea, flow limitations and respiratory/ breathing issues especially during REM sleep periods. By doing so, has stopped the sequence of events of REM sleep issues, insomnia, Awake Bruxism and the symptoms of Dementia.

4. By having a high starting pressure, pressure changes during the night are minimized. In addition, Minute Ventilation and the two components, respiratory rate and tidal volume of air that you are breathing in have little up and down or “yo-yo” movement for large parts of the night. The tidal volume is mostly between 180 ml to 660 ml/ breath. Before adjustments, the range was ZERO to 880 ml/ breath or more.

5. The other settings such as pressure support of 5.4 cmH2O (difference between inhale and exhale pressure), high trigger and cycle breathing sensitivity and TI Min of 1.1 seconds and TI Max of 1.2 seconds are the same before and after adjustments to the machine settings. Using these settings is making breathing easy and to stop insomnia and overcome treatment-emergent central sleep apnea.

6. With the above settings, there is order and control to my breathing all night and you will stop constant waking up during the night. Note that the Statistics on the left hand side now show minimum numbers rather than ZERO readings before adjustments were made to the settings.

Other than increasing the pressure settings as being essential to stop hypoxia and to significantly reduce sleep disordered breathing, the steps to take to succeed and have a great night’s sleep are detailed on the blog page Guide to Success using CPAP and Bilevel.

The first question many people may ask is to do with the very high starting pressures of IPAP of 18.2 cmH2O and EPAP of 12.8 cmH2O and how difficult it must be to breathe against this high pressure. Note that during the night, my maximum pressure may go above 20.0 cmH2O.

The pressure settings are one aspect of breathing against high pressure. The other aspect to consider is the tidal volume of air that you are breathing in.

With high pressure, I have minimal sleep disordered breathing. Instead of breathing against 880 ml/ breath or more before adjustments, I now have a breathing maximum of usually below 750 ml/ breath. In addition, the gap between the top and bottom of the surge in tidal volume during the REM sleep period of 4 to 5 hours of sleep has reduced to normally less than 500ml from 880 ml/ breath or more.

Any surge in tidal volume of air is gentler and occurs over a longer period of time than before adjustments to the settings. The surge is now a slower increase and may be over a minute rather than 9 seconds as detailed in the previous blog post.

Bringing order and control to your breathing and the tidal volume of air will allow for much easier breathing out at high pressure and stops you waking up and having insomnia occurring during the night.

In arriving at 18.2 cmH2O starting IPAP pressure, I had a bit of luck which is the reason for the quote at the top of the page.

Above 14.0 cmH2O IPAP and 8.8 cmH2O EPAP starting pressure, I was having many side effects and issues as outlined earlier especially air coming through the eye tear duct and out the eye. Even though I had increased the starting IPAP and EPAP pressures quite a lot, I was still having ZERO readings for Minute Ventilation and the two components, respiratory rate and tidal volume of air during the REM sleep period of 4 to 5 hours of sleep.

I knew more pressure was required. Thought that if I “hang in a little bit longer” and increased the pressure slowly by 0.2 cmH2O at a time, that I may have some luck and things would work out. The worst that was going to happen was that I was going to end up with bad aerophagia and terrible, painful red sore eyes in the morning as detailed on the blog post Air through Eye Tear Duct - Introduction.

A second question many people may ask is how I worked out that IPAP of 18.2 cmH2O and EPAP of 12.8 cmH2O were to be the starting pressures on the machine.

I will look at this question and how these pressures were the “sweet spot” or optimal starting pressures for me on the next blog post.

Further details of the combination of REM sleep issues, obstructive sleep apnea, insomnia and Awake Bruxism and how they may be early warning signs or markers of a diagnosis of REM Sleep Behaviour Disorder (RBD) and subsequently Alzheimer’s Dementia and Parkinson's disease and other neurodegenerative disorders are on the following blog posts: